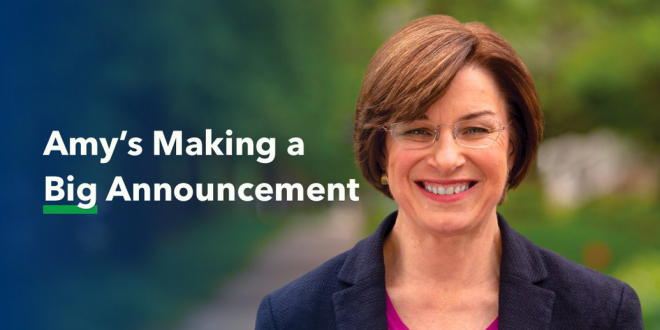 Democratic Sen. Amy Klobuchar of Minnesota is set to join the 2020 presidential race Sunday, becoming the most prominent Midwestern candidate as the party tries to win back voters in a region that helped put Donald Trump in the White House.

She is citing the need to “heal the heart of our democracy and renew our commitment to the common good,” according to her prepared remarks. Klobuchar, who easily won a third-term last year, has pointed to her broad appeal across Minnesota as she has discussed a 2020 run.

Sen. Amy Klobuchar’s mistreatment of her office staff began more than a decade ago and eventually caused such concerns that in 2015, then-Senate Minority Leader Harry Reid (D-Nev.) spoke to her privately and told her to change her behavior, multiple sources have confirmed to HuffPost.

Klobuchar, a Democrat who plans to announce whether she’s running for president at a rally in Minneapolis on Sunday, has faced trouble hiring campaign aides because of her history of mistreating staff.

Former members of her staff told HuffPost that Klobuchar ground down morale with constant and cruel late-night emails and claimed staff was required to perform personal duties for her — such as washing dishes in her home — in violation of the Senate’s rules and federal law against personal use of the office.

Previous Mick Mulvaney: Another Shutdown Is Still On The Table
Next Trump: Amy Klobuchar Looked Like A Snowman Today