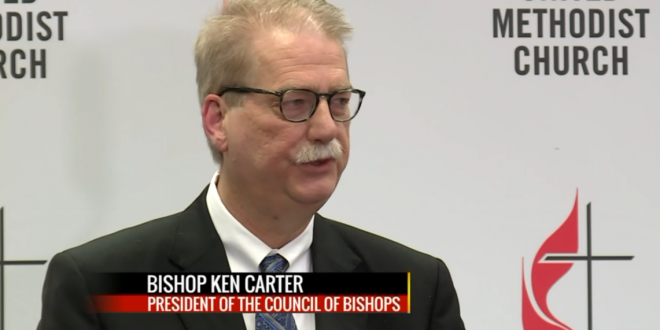 The United Methodist Church on Tuesday voted to strengthen its ban on gay and lesbian clergy and same-sex marriages, a decision that could split the nation’s second-largest Protestant church.

After three days of intense debate at a conference in St. Louis, the vote by church officials and lay members from around the world doubled down on current church policy, which states that “the practice of homosexuality is incompatible with Christian teaching.” The vote served as a rejection of a push by progressive members and leaders to open the church to lesbian, gay, bisexual and transgender people.

Now, a divide of the United Methodist Church, which has 12 million members worldwide, appears imminent. Some pastors and bishops in the United States are already talking about leaving the denomination and possibly creating a new alliance for gay-friendly churches.

Mainstream UMC wanted the more progressive One Church Plan to pass. It would have lifted the bans on LGBT clergy and same-sex marriage while protecting those who did not agree with the marriages. But supporters of inclusion like Mainstream UMC say they are not giving up. Reconciling Ministries Network released a statement Tuesday night to that effect.

“We continue our pursuit of a church that loves as Jesus loves,” the statement said. “We will gather soon to determine the next steps in our continued advocacy for LGBTQIA+ people in The UMC. There may be a “traditional” (divisive) plan, but by no means is our work abandoned.”

There is a good chance human sexuality in the church will come up again next year. The General Conference meets again in 2020 for its regularly scheduled quadrennial meeting. The top policymaking body of the church will gather next in Minneapolis.