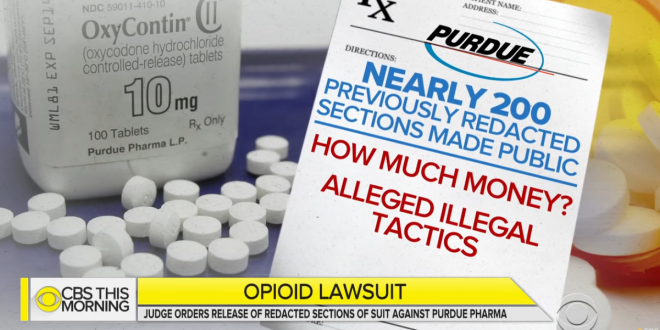 As the nation’s opioid crisis was deepening, the company that makes a powerful prescription painkiller considered marketing an anti-addiction drug to “an attractive market” of people with addictions, according to allegations in court documents made public Thursday.

The attorney general’s office in Massachusetts is suing Connecticut-based Purdue Pharma, along with some company executives and members of the family that owns it in an effort to hold them accountable for the toll of the drug crisis in the state.

On Thursday, the company lost a legal battle to keep some parts of the lawsuit confidential. The state made public for the first time a wholly unredacted version of the complaint it filed last year.

Pharmaceutical giant Purdue Pharma LP secretly pursued a plan, dubbed “Project Tango,” to become “an end-to-end pain provider” by selling both opioids and drugs to treat opioid addiction, all while owners on the board — members of one of America’s richest families — reaped more than $4 billion in opioid profits, according to a lawsuit newly unredacted on Thursday.

The suit says the company and its owners, the Sackler family, whose name adorns some of the most prestigious cultural institutions in the country, engaged in a decade of deception to push their pharmaceuticals, namely the painkiller OxyContin, on doctors and patients, publicly denying what internal documents show they privately knew to be true: that the highly addictive drugs were resulting in overdoses and deaths.