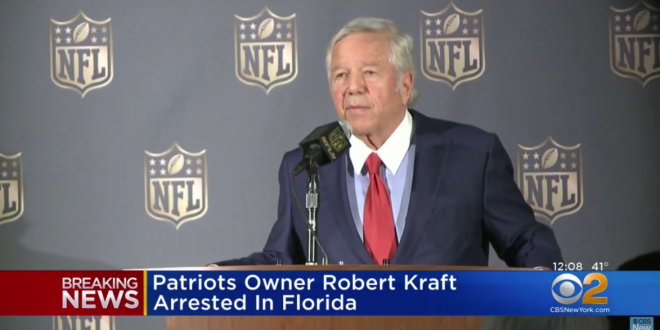 New England Patriots owner Robert Kraft is one of dozens and possibly hundreds of men identified in a monthslong investigation of a human trafficking and prostitution ring involving five day spas in Florida.

Jupiter Police Chief Daniel Kerr said he was shocked to learn Kraft, who is worth $6 billion, was paying for sex inside a strip-mall massage parlor, the Orchids of Asia Day Spa. “We are as equally stunned as everyone else,” Kerr said.

A spokesperson for Kraft denied the allegations. “We categorically deny that Mr. Kraft engaged in any illegal activity. Because it is a judicial matter, we will not be commenting further,” a spokesman for Kraft said in a statement.

The spa was among 10 shut down in the Orlando area, Palm Beach County and the Treasure Coast after a several-month investigation revealed women there were in “sexual servitude,” according to arrest records. A detective said the acts were captured on surveillance video.

When asked if Kraft was at the spa “as a regular” or “seemed familiar with this,” the lead Jupiter police detective on the case Andrew Sharp answered: “I would say, going through the evidence, yes.” Surveillance revealed a steady stream of male clients at the nondescript business in a Jupiter strip center between 9 a.m. and 11:30 p.m. They would stay for 30 minutes to an hour, arrest records show.

Martin County Sheriff William Snyder said he believes women in the spas were supplied by human traffickers with ties to China and New York. Millions of dollars began to be seized and about 300 arrest warrants were issued this week in connection with the 10 spas.