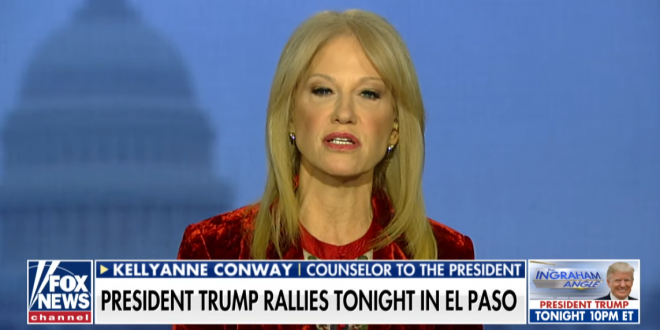 Trump White House counselor Kellyanne Conway launched a series of strange attacks at Democratic presidential candidates, including a shot at Beto O’Rourke for holding a rally in El Paso to get “free airtime.”

Conway called O’Rourke a “loser,” and noted that the El Paso rally will get O’Rourke “a lot of free airtime for the would-be 2020 race, and people should see that for what it is.” O’Rourke has not declared a candidacy for 2020, but Donald Trump has, and will almost certainly get some “free airtime” for his own El Paso rally.

Her attack on Sen. Amy Klobuchar (D-MN) was just plain weird. Noting the recent stories about Klobuchar’s reputation as a tough boss to work for, Conway said: “You can change the ‘A’ in Amy to ‘O,’ and get ‘oh my’ instead of ‘Amy’ there.”