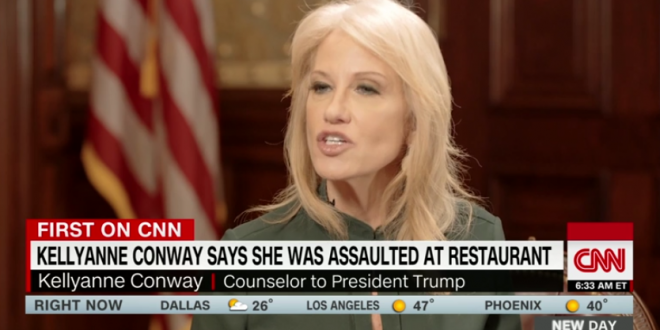 Kellyanne Conway says that she was grabbed and shaken by a woman while out with her teenage daughter in a Maryland restaurant late last year. In an interview with CNN, the White House counselor to President Donald Trump talked about the alleged assault for the first time publicly.

She recounted how the woman, who was later identified by authorities as a 63-year-old Maryland resident, approached her “screaming her head off” at Uncle Julio’s, a Mexican restaurant in the DC suburb of Bethesda, as Conway’s middle school-aged daughter looked on.

Conway said she called 911, though the woman had left before local police arrived. After an investigation, Mary Elizabeth Inabinett was charged in November with second-degree assault and disorderly conduct. A trial is set for March in Maryland state court.

There are more details about the alleged incident at the link. A lawyer for Inabinett denies Conway’s claims and says that she will plead not guilty.

Previous SCOTUS Blocks Louisiana Abortion Law In 5-4 Vote
Next Ronan Farrow: The Enquirer Tried To Blackmail Me Too