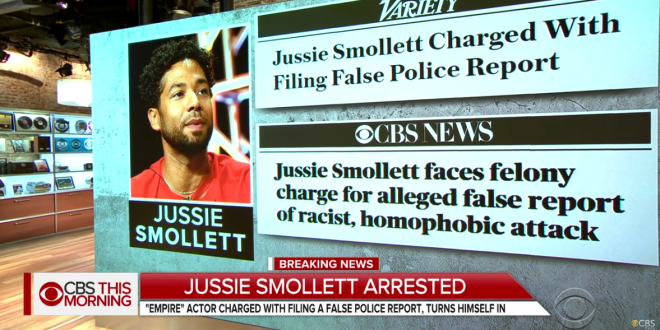 “Empire” actor Jussie Smollett is in custody to face charges of making a false police report when he said he was attacked in downtown Chicago late last month by two men who hurled racist and anti-gay slurs and looped a rope around his neck, police said. Police spokesperson Anthony Guglielmi said prosecutors charged Smollett with felony disorderly conduct, an offense that could bring one to three years in prison and force the actor to pay for the cost of the investigation into his report of a Jan. 29 beating.

Former Cook County prosecutor Andrew Weisberg said judges rarely throw defendants in prison for making false reports, opting instead to place them on probation, particularly if they have no prior criminal record. Smollett has a record – one that concerns giving false information to police when he was pulled over on suspicion of driving under the influence. According to records, he was also charged with false impersonation and driving without a license.