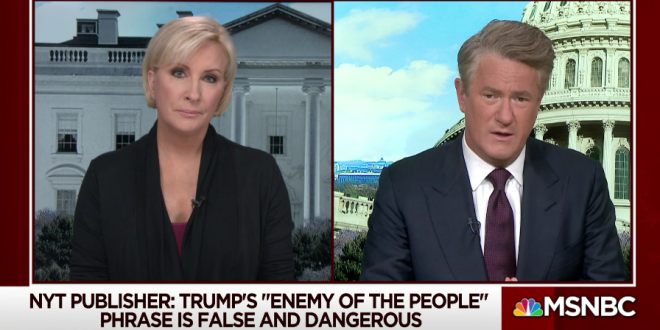 Joe Scarborough: Trump’s Stalinist Rhetoric Directly Led To The Terrorist’s Murder Plot Against Me And Others

“Donald Trump has been warned repeatedly that talking about enemies of the people is a Stalinist phrase, that it will encourage some of his more unhinged followers. We’ve all known that Donald Trump and his words and his attacks about enemies of the people would lead to this type of behavior. This is now the second time that we know about, from the pipe bombs to yesterday, but yesterday was obviously far more specific, far more dangerous. And that is exactly what Donald Trump is encouraging.” – MSNBC host Joe Scarborough, whose name appears on the hit list of the white supremacist Coast Guard officer arrested yesterday.

An armed white supremacist terrorist searched for where @JoeNBC lived after reading a headline in which Scarborough criticized Trump. We should be shocked that we’re not shocked – and appalled at what’s being stirred up in our country. https://t.co/Xjc3HDMq5l