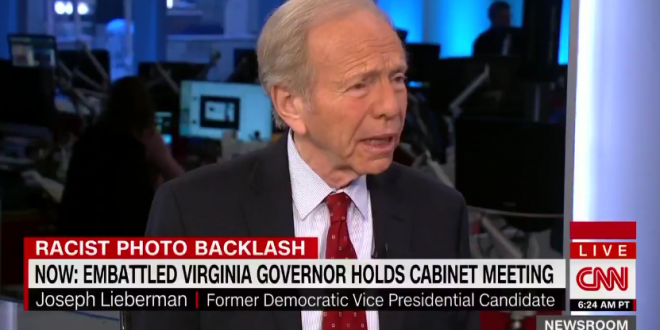 Former Sen. Joe Lieberman (I-Conn.) on Monday came to the defense of Virginia Gov. Ralph Northam (D), saying he shouldn’t yet resign despite the revelation that his medical school yearbook page included a racist photo.

Lieberman said during an interview on CNN that there has been a “a rush to judgment that is unfair to” Northam.

“One, he says he wasn’t in that picture. Two, I think we ought to fairly ask him, did he know the picture was on his page of the yearbook? And three, he ought to be judged in the context of his whole life,” Lieberman said.

Fmr. Independent Sen. @JoeLieberman tells @jimsciutto “there’s a rush to judgement” around Gov. Northam, adding that he needs to explain if he knew about the picture and “be judged in the context of his whole life” https://t.co/QIVfUHvDRl pic.twitter.com/VpWIVUuyJT

Previous New England Patriots Star Won’t Visit Trump At White House, But Says It “Would Be Dope” To Meet Obama
Next Jeff Flake’s Elevator Protester To Be AOC’s SOTU Guest