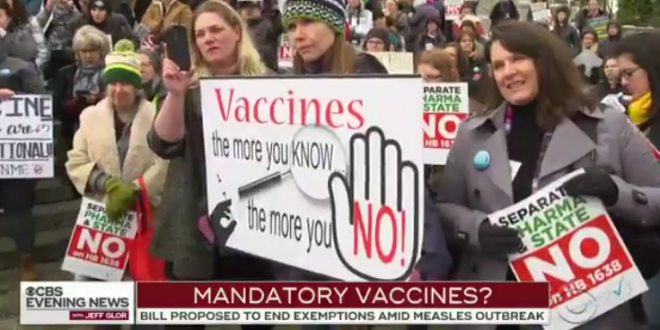 Anti-vaccine activists packed an Olympia, Washington public hearing Friday to oppose a bill that would make it harder for families to opt out of vaccination requirements for measles, mumps and rubella amid the state’s worst measles outbreak in more than two decades.

An estimated 700 people, most of them opposed to stricter requirements, lined up before dawn in the cold, toting strollers and hand-lettered signs, to sit in the hearing, which was so crowded that staff opened up additional rooms to accommodate the crowd. Many gathered outside afterward for a rally.

Anti-vaccine activists, including Robert F. Kennedy Jr., a prominent vaccine conspiracy theorist, claimed that health officials are covering up vaccine dangers. Some said their children had been injured or sickened by immunizations. One falsely said the majority of people diagnosed with measles have been vaccinated.

Amid a measles outbreak that has sickened more than 50, Washington lawmakers consider bill that would remove parents’ ability to claim a personal or philosophical exemption to opt their school-age children out of combined measles, mumps and rubella vaccine https://t.co/YVRVEJWr0k

Amid a measles outbreak that has sickened more than 50 people in the Pacific Northwest, Washington lawmakers are weighing a stricter vaccine bill. https://t.co/cx3we4Bzg3

With more than 50 cases of measles in Washington state, there is a new push to change a law that allow parents to refuse vaccines for philosophical reasons. Not so fast, said hundreds who rallied against the change on Friday. https://t.co/7K2kYzCXGR

Hundreds protest for right not to vaccinate children in Washington during ongoing outbreak of measles https://t.co/CCXjXX7w0K pic.twitter.com/JkPVZSGSCx

Previous Northham: I Overreacted To First Reports On Yearbook
Next CHATTER AWAY: Overnight Open Thread