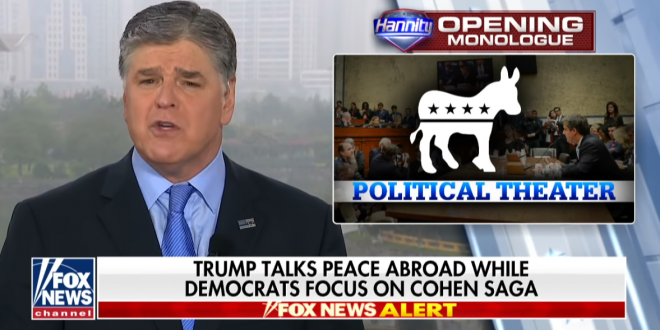 Sean Hannity flipped out over Michael Cohen’s public testimony in typical fashion last night but managed to avoid mentioning that Cohen used to be his lawyer too.

An excerpt via Media Matters:

What we saw in Washington all day, just hours ago, nonstop, was a Democratic Party, a hyperventilating, hysterical media putting politics over country, with a political charade designed to just embarrass and trash the president while he represents our country abroad. Democrats don’t care one bit about Michael Cohen and his family. Not at all, because they were the ones calling him every name in the book until fairly recently.

As a result of their partisan hatred of Trump, they don’t care about Michael Cohen – they don’t care about his family – and they may have put him in further legal jeopardy with the Southern District of New York that seemed pretty mad at him already, for nearly seven hours under oath at the request of House Democrats. Michael Cohen was, frankly, used by Democrats on this historic day to advance what is now a psychotic hate Trump mob that exists in this country.