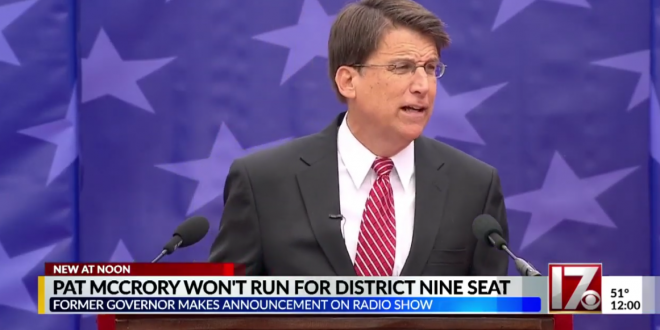 Former North Carolina Gov. Pat McCrory said Monday that he will not run for Congress in the state’s 9th District, hours after a tweet that suggested he might.

“My fire in the belly is teaching and being a radio host and keeping the option open of running for governor or senator (in 2022),” McCrory, a Republican, said on his morning show on WBT radio. His announcement came four days after the State Board of Elections ordered a new election following a fraud investigation.

Sunday night McCrory sparked rumors of a 9th District run when he tweeted, “At 8:15am, I will be sharing my personal status on what is now the 9th district congressional election.”

Previous Britain: Labour Reverses, Will Back Second Brexit Vote
Next Pat Robertson: Homosexuals Are Willing To Destroy Society To “Legitimize The Weird Way They Do Sex”