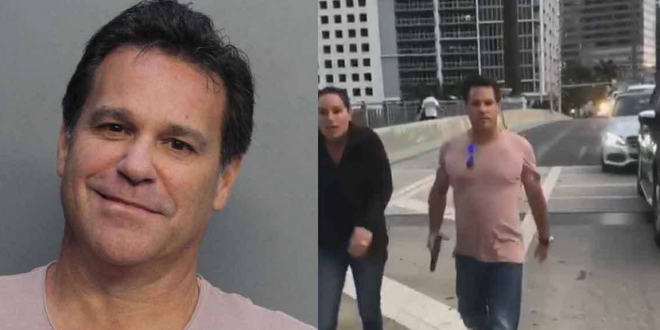 Mark Bartlett, who is white, originally was charged only with carrying a concealed firearm after he allegedly pulled a gun on protesters blocking a Miami street as a part of a demonstration on Martin Luther King Jr. Day. But prosecutors announced hate crime charges on Tuesday, citing the completion of final interviews and witness statements.

Video circulated on social media last month showed Bartlett wielding a handgun and yelling the N-word repeatedly. “Get in front of my car, you f—ing piece of s—. N—— suck,” the man yelled from the window of his black SUV. He continued to swear and yell racial slurs as he exited his vehicle, brandishing his gun and scattering protesters.

Neither Mark Bartlett nor his attorneys appeared in court for his Wednesday arraignment, but Miami-Dade Circuit Judge Alberto Milian accepted a written plea of not guilty to felony charges filed under Florida’s hate-crime sentencing “enhancement” law.

Milian, however, ordered Bartlett and his lawyers to appear in court next Tuesday as prosecutors seek to increase the amount of bond he must post to remain free from jail while awaiting trial.

Tuesday’s court hearing was filled with supporters of the teenagers, including over a dozen older women who belong to the Unrepresented People’s Positive Action Council, a group that advocates for minority communities

Previous Christian TV Host: Trump Only Wants To Decriminalize Homosexuality Because He Is “Owned By The Jews”
Next MISSOURI: Lawmakers Advance GOP Bible Courses Bill