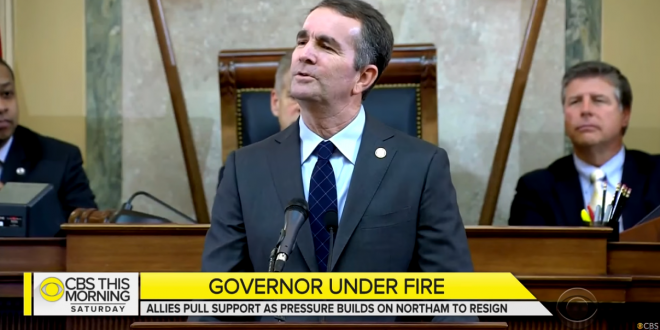 Within hours of a racist yearbook photo of Virginia Gov. Ralph Northam surfaced, prominent fellow Democrats and organizations began to call on him to resign. “It doesn’t matter if he is a Republican or a Democrat. This behavior was racist and unconscionable. Governor Northam should resign,” Democratic 2020 contender Julián Castro wrote on Twitter.

Progressive groups like Daily Kos, Priorities USA, and MoveOn also want Northam out: aside from the fact that the picture plays into two of the nation’s cruelest post-Reconstruction racist institutions, Virginia is still a blue-leaning swing state, and having Northam in the party in 2020 could butcher the chances of down-ballet Democrats.

If he does resign, Lieutenant Governor Justin Fairfax will become Virginia’s second black governor – the first, Douglas Wilder, who was elected in 1990, was the nation’s first African American to ever hold that position.

New Jersey Gov. Phil Murphy (D), the vice chair of the Democratic Governors Association who is set to lead the national group in 2020, has called on Virginia Gov. Ralph Northam (D) to resign amid mounting backlash over a racist photo.

“I don’t see the governor’s got any other choice other than to step aside,” Murphy said during an interview Friday night on MSNBC.

“I say it with a heavy heart because I know him and I believe he’s a good man, but this is…disqualifying. Particularly at this moment in time and with the division in our country.”