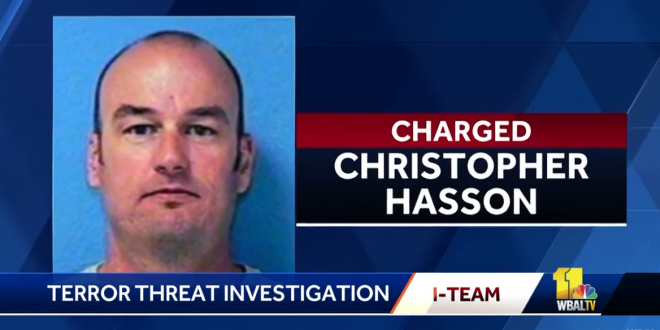 The U.S. Coast Guard lieutenant spent hours on end planning a wide-scale domestic terrorist attack, even logging in at his work computer on the job at headquarters to study the manifestos and heinous paths of mass shooters, prosecutors say.

It was only after Hasson’s arrest last Friday at his workplace that the chilling plans prosecutors assert he was crafting became apparent, detected by an internal Coast Guard program that watches for any “insider threat.”

As he built an arsenal, prosecutors contend, Hasson read manifestos by the Unabomber, the Virginia Tech shooter and the Olympic Park bomber among other domestic mass shooters, and also looked for guidance to the plot of right-wing terrorist Anders Behring Breivik, who in 2011 unleashed two attacks in Norway that killed 77 people.

According to the report below, Hasson’s public defender is arguing for his release pending trial on the gun and drugs charges, saying that it’s not a crime to write “hostile things.”