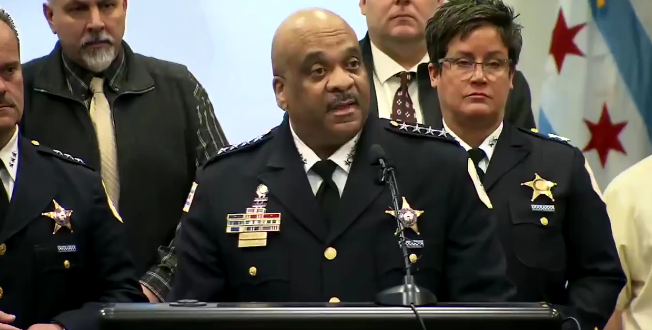 “Empire” actor Jussie Smollett choreographed a homophobic, racist attack against himself with the help of two brother he knew, in an attempt to raise his profile because he was dissatisfied with the salary he was making, police said Thursday.

Eddie Johnson, superintendent of the Chicago Police Department, kicked off the presser, explaining what their investigation concluded. “This announcement today recognizes that ‘Empire’ actor Jussie Smollett took advantage of the pain and anger of racism to promote his career,” he said.

“First Smollett attempted to gain attention by sending a false letter that relied on racial homophobic and political language. When that didn’t work, Smollett paid $3,500 to stage this attack… The stunt was orchestrated by Smollett because he was dissatisfied with his salary so he concocted a story about being attacked.”

“Smollett took advantage of the pain and anger of racism to promote his career,” Chicago Police Supt. Eddie Johnson said at a news conference Thursday morning. “This publicity stunt was a scar that Chicago didn’t earn, and certainly didn’t deserve.”

“I’m left hanging my head and asking why. Why would anyone, especially an African American man, use the symbolism of a noose to make false accusations? How could someone look at the hatred and suffering associated with that symbol and see an opportunity to manipulate that symbol to further his own public profile?” Johnson said.

“How can an individual who’s been embraced by the city of Chicago turn around and slap everyone in this city in the face by making these false claims?”

“How can an individual who has been embraced by the city of Chicago, turn around and slap everyone in this city in the face,” says CPD Superintendent Eddie Johnson. Jussie Smollett turned himself in around 5 a.m., police said. “Bogus police reports cause real harm.” pic.twitter.com/jo0FNYXouc