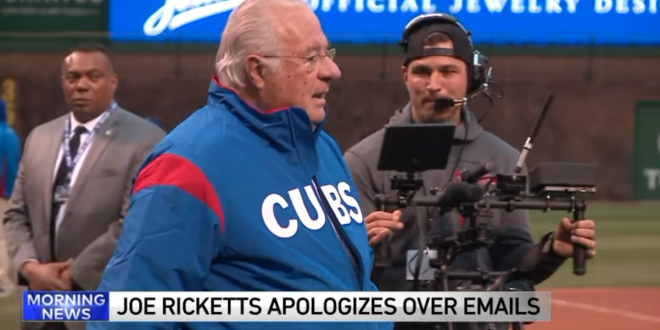 A series of emails obtained and published by Splinter News on Monday appears to show Joe Ricketts, the patriarch of the family that owns the Cubs, sharing and endorsing racist jokes and conspiracy theories. Ricketts, 77, and his son and team Chairman Tom Ricketts, issued separate statements regarding the emails after they were posted.

“I deeply regret and apologize for some of the exchanges I had in my emails,” Joe Ricketts said in a statement. “Sometimes I received emails that I should have condemned. Other times I’ve said things that don’t reflect my value system. I strongly believe that bigoted ideas are wrong.”

Tom Ricketts emphasized that his father isn’t involved in the operations of the Cubs, although Joe Ricketts sold 34 million shares of the TD Ameritrade company he founded for about $403 million to cover the equity needed to purchase the Cubs in 2009.

“We are aware of the email exchanges involving Joe Ricketts. While many of the emails were not written by Mr. Ricketts, the content is extremely offensive and completely at odds with the values and principles of Major League Baseball. Providing an inclusive and welcoming environment for everyone is extremely important for MLB and our 30 clubs.”

I read the Splinter piece last night and hoo boy, Ricketts is right out of the Infowars/Gateway Pundit loony bin. Ricketts donated at least $1 million to the Trump campaign in 2016.

He first appeared on JMG in 2017 when he bought and promptly shut down Gothamist and DNA Info after their writers unionized.

His daughter, Laura Ricketts, made news a few years ago when she became the first openly gay co-owner of a major league sports franchise. Her three brothers are also co-owners.

One of those brothers, Todd Ricketts, first appeared on JMG in 2017 when Trump nominated him to be Deputy Commerce Secretary.

He withdrew after he was “unable” to meet the financial divestment requirements. He is currently the finance chair of the RNC, a role he once shared with Michael Cohen.

Previous Former ICE Director: Last Night Proved That Trump Will Be Recognized As Among The Greatest Presidents Ever
Next NEW MEXICO: Dem Governor Literally Runs Through Walls To Protest Trump’s Immigration Policies [VIDEO]