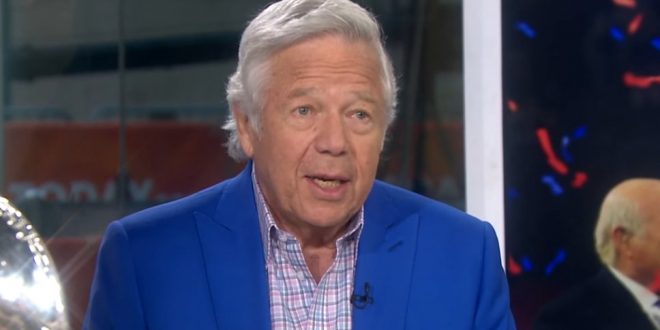 In his Tuesday news conference about a major human trafficking investigation , Martin County Sheriff William Snyder said about 100 men would be arrested. When asked about prominent people or celebrities, Snyder said, “There will be a newsmaker in this one.”

Kraft is an ardent Trump supporter and last appeared on JMG during Super Bowl week when he declared that Trump is “working very hard to serve America’s best interests.” Kraft is a longtime member at Mar-A-Lago.

#BREAKING – @Patriots owner Robert Kraft arrested in Jupiter in a sex sting operation, along with many others.
This story developing….

BREAKING: Patriots owner Robert Kraft has been charged in part of a large prostitution bust.

"I can't speak to the dollar number that was paid." pic.twitter.com/vGIVDLYEcB