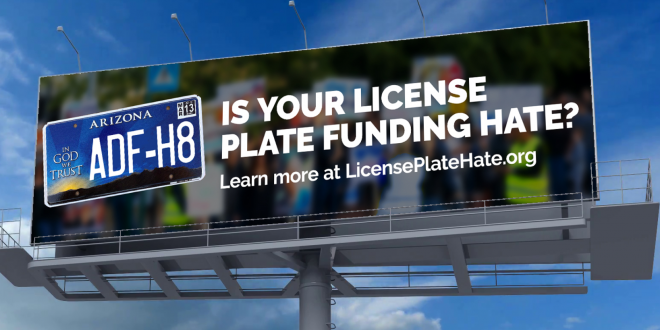 Arizona citizens have been inadvertently funding a Christian hate group whenever they pay the fee for the specialty “In God We Trust” license plate.

It’s not public knowledge that a large portion of that fee goes to Alliance Defending Freedom, and State Sen. Juan Mendez has filed two bill intended to make that knowledge transparent and put a kibosh on that particular plate being used to fund anything.

Now he’s working with atheist groups to make this issue even more public. American Atheists and the Secular Coalition for Arizona are launching a billboard campaign today that encourages Arizonans to learn more about the issue. AA paid for the ad, which will appear in three locations in Phoenix through March.

As I reported last week, since the plate’s launch, nearly $1 million in state fees from its sales have secretly gone to the ADF. Learn more at LicensePlateHate.org.