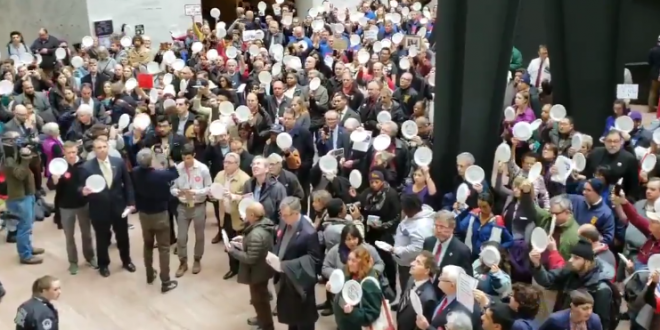 Federal workers gathered Wednesday at the Hart Senate Office Building to protest the ongoing government shutdown, which has left hundreds of thousands of them without pay.

The workers held 33 minutes of silent protest, or one minute for every day the shutdown has lasted. Protesters shook their fists during the protest and chanted, “No more food banks. We need paychecks.”

They also held paper plates with messages written on them, such as “open the government” and “federal workers are going hungry.” The plates were reportedly meant to symbolize that some workers can’t feed their families without pay.

33 minutes of silent protest here in Hart Senate Office Building for each day of shutdown. Federal workers from various unions holding plates to show they need to feed their families. pic.twitter.com/oNtmwRtgAZ

Since @senatemajldr won’t talk to working people, we’re going to go talk to him. #OccupyHart #1u #StoptheShutdown pic.twitter.com/ZAjWWvY6tN

.@JDavidCoxSr, federal workers, and their allies are ready to put their freedom on the line for America’s workforce. #OccupyHart #1u #StopTheShutdown pic.twitter.com/nFaYFLNWTO

A loud group of protestors is outside @senatemajldr Mitch McConnell’s office in the Russell Senate Building.

“We want a paycheck!”

Capitol Police began pushing the media back to keep a path open in the hallway.

Previous Michael Cohen Postpones Testimony Before Congress Due To Trump’s “Ongoing Threats Against My Family”
Next Pelosi Fires Back At Trump’s SOTU Letter: I Said “No”