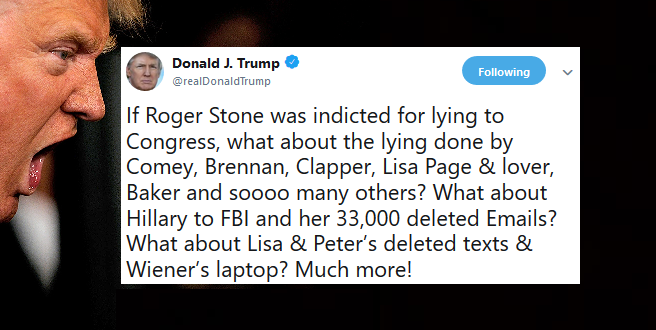 Trump: Why Hasn’t Hillary Been Indicted For Lying?

President Donald Trump again addressed Roger Stone’s indictment on Twitter early Saturday, saying if Stone is charged with lying to Congress, the former FBI and CIA officials who were involved in the early days of the investigation into Russian election interference should be as well.

There is no evidence that the former officials mentioned by Trump — which include the former directors of FBI, CIA and National Intelligence — lied to Congress. None of them have been charged with any crimes.

Stone, a longtime associate of Trump, was arrested in the early morning hours of Friday at his Fort Lauderdale home. He was indicted on charges of obstruction of an official proceeding, false statements and witness tampering. He was released on $250,000 bond Friday afternoon.

If Roger Stone was indicted for lying to Congress, what about the lying done by Comey, Brennan, Clapper, Lisa Page & lover, Baker and soooo many others? What about Hillary to FBI and her 33,000 deleted Emails? What about Lisa & Peter’s deleted texts & Wiener’s laptop? Much more!

Thank you to the Republican National Committee, (the RNC), who voted UNANIMOUSLY yesterday to support me in the upcoming 2020 Election. Considering that we have done more than any Administration in the first two years, this should be easy. More great things now in the works!

We have turned away, at great expense, two major Caravans, but a big one has now formed and is coming. At least 8000 people! If we had a powerful Wall, they wouldn’t even try to make the long and dangerous journey. Build the Wall and Crime will Fall!