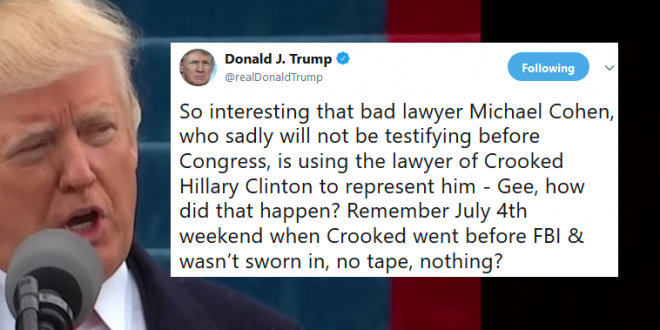 President Donald Trump on Thursday bragged about his former “fixer” backing off publicly testifying against him after the president had lobbed multiple threats aimed at his father-in-law. Cohen on Wednesday announced that he was indefinitely postponing his planned testimony before the House of Representatives next month due to threats made by the president to his father-in-law.

So interesting that bad lawyer Michael Cohen, who sadly will not be testifying before Congress, is using the lawyer of Crooked Hillary Clinton to represent him – Gee, how did that happen? Remember July 4th weekend when Crooked went before FBI & wasn’t sworn in, no tape, nothing?