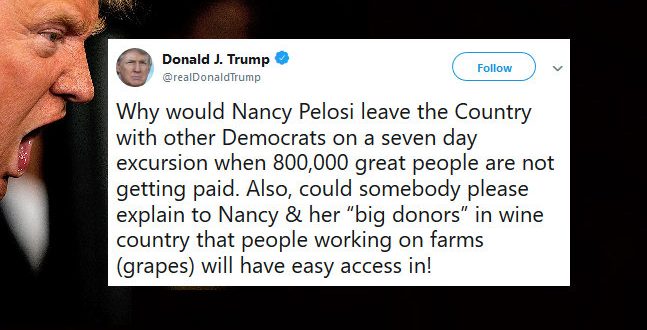 President Trump slammed Speaker Nancy Pelosi (D-Calif.) for planning to leave the country on a congressional delegation during the government shutdown.

He also needled the Speaker for taking donations from California’s wine country, writing that workers would still have access to come work there even after a wall is built on the border.

The tweet came a day after Trump in a letter to Pelosi canceled a military plane that would have taken Pelosi and other lawmakers to Afghanistan, where they were set to visit U.S. troops.

Why would Nancy Pelosi leave the Country with other Democrats on a seven day excursion when 800,000 great people are not getting paid. Also, could somebody please explain to Nancy & her “big donors” in wine country that people working on farms (grapes) will have easy access in!

“It’s the Democrats keeping everything closed.” @JimInhofe So true!

Another big Caravan heading our way. Very hard to stop without a Wall!

Border rancher: “We’ve found prayer rugs out here. It’s unreal.” Washington Examiner People coming across the Southern Border from many countries, some of which would be a big surprise.

Trump traveled to Iraq, Louisiana and Texas during the shutdown. And he kept his Iraq trip secret until he landed.