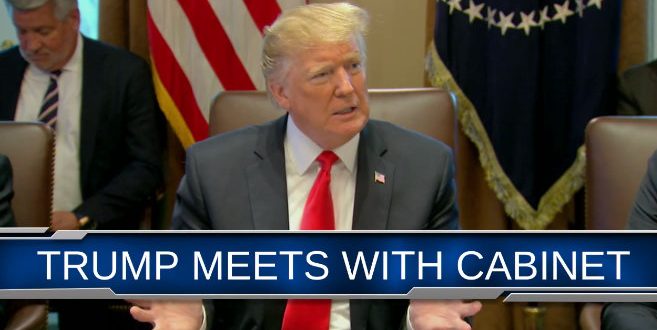 Trump Refuses To Back Down On Shutdown: I Want A Wall That Only A Champion Pole Vaulter Could Jump

President Donald Trump says the southern border is “like a sieve,” and he’s lamenting how U.S. authorities fired tear gas into Mexico during the first hours of the new year to repel about 150 migrants trying to breach the border fence in Tijuana.

Trump spoke during a White House meeting with his Cabinet as the partial government shutdown continues into its 12th day. Congress and the president are at an impasse over funding for Trump’s pet project, a wall along the U.S.-Mexico border.

Trump says a complete wall is needed. Trump says people then couldn’t enter unless they were a “champion pole vaulter.”

“You can’t get through… unless you’re a world class pole vaulter.”

Trump emphasizes just how difficult he wants getting through his proposed border wall to be #tictocnews pic.twitter.com/Y84luL5jDn

Previous 12 For California: An Idea For Senate Reapportionment
Next Trump: There’s No Reason For US To Be In “Lost” Syria: Nothing But Sand And Death, There’s No Vast Wealth