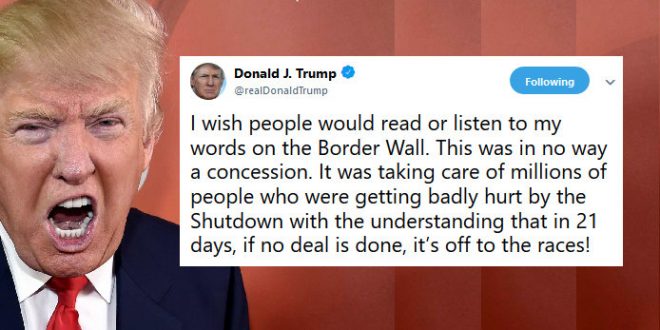 Trump Rants: I Totally Didn’t Cave When I Just Caved

President Trump insisted that he did not concede to Congressional Democrats by ending the government shutdown without getting money for his desired wall along the southern border in a Friday evening tweet. In remarks in the Rose Garden, Trump explained that if no border security deal was made by Feb. 15, the government could close down again or he could call a national emergency to get his funding.

I wish people would read or listen to my words on the Border Wall. This was in no way a concession. It was taking care of millions of people who were getting badly hurt by the Shutdown with the understanding that in 21 days, if no deal is done, it’s off to the races!

He announced he’s going to sign a wall-free temporary spending package to reopen the government.https://t.co/LN49mtlC6n