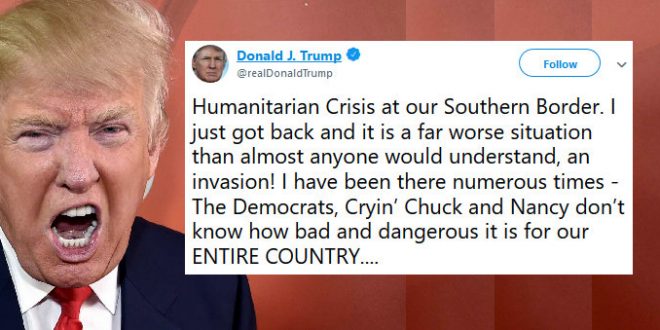 Trump: The Invasion Is Far Worse Than You Understand

President Donald Trump is edging closer to declaring a national emergency to fund his long-promised border wall, as pressure mounts to find an escape hatch from the three-week impasse that has closed parts of the government, leaving hundreds of thousands of workers without pay.

Some 800,000 workers, more than half of them still on the job, were to miss their first paycheck on Friday under the stoppage, and Washington was close to setting a dubious record for the longest government shutdown in the nation’s history.

Those markers — along with growing effects to national parks, food inspections and the economy overall — left some Republicans on Capitol Hill increasingly uncomfortable with Trump’s demands.

Humanitarian Crisis at our Southern Border. I just got back and it is a far worse situation than almost anyone would understand, an invasion! I have been there numerous times – The Democrats, Cryin’ Chuck and Nancy don’t know how bad and dangerous it is for our ENTIRE COUNTRY….

…The Steel Barrier, or Wall, should have been built by previous administrations long ago. They never got it done – I will. Without it, our Country cannot be safe. Criminals, Gangs, Human Traffickers, Drugs & so much other big trouble can easily pour in. It can be stopped cold!