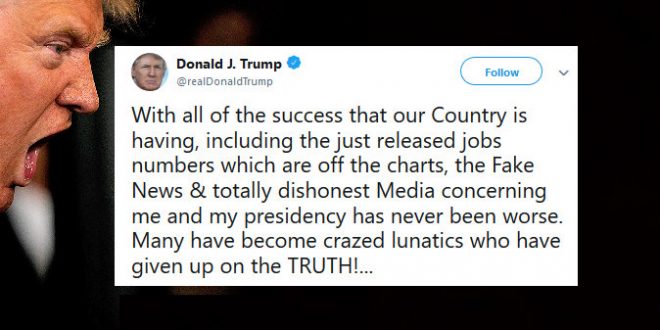 Trump Rages Against “Crazed Lunatics” In The Media

President Trump appears to be upset with media outlets for not covering a recent and glowing jobs report to the degree that he would prefer. In a vacuum of news, this would certainly get more attention than it has, but the nation is currently in day 17 of a government shutdown over a significant political impasse over Trump’s desire for Congressional funding over a border wall.

With all of the success that our Country is having, including the just released jobs numbers which are off the charts, the Fake News & totally dishonest Media concerning me and my presidency has never been worse. Many have become crazed lunatics who have given up on the TRUTH!…

…The Fake News will knowingly lie and demean in order make the tremendous success of the Trump Administration, and me, look as bad as possible. They use non-existent sources & write stories that are total fiction. Our Country is doing so well, yet this is a sad day in America!

….The Fake News Media in our Country is the real Opposition Party. It is truly the Enemy of the People! We must bring honesty back to journalism and reporting!