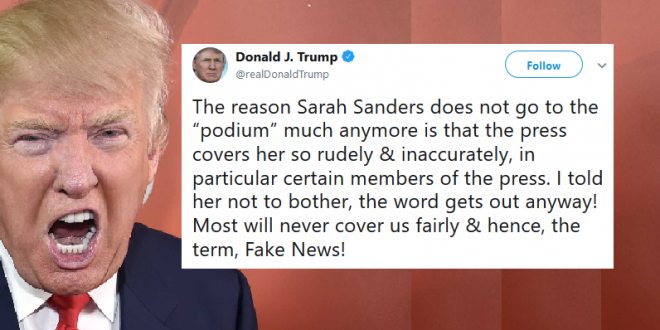 Trump: I’ve Told Sarah Sanders “Not To Bother” With Press Briefings Because Everybody Is So Rude To Her

President Trump said in a Tuesday tweet that he’s directed White House Press Secretary Sarah Sanders “not to bother” with press briefings because “certain members of the press” cover her “rudely” and “inaccurately.”

The current 35-day streak without a press briefing from the White House podium is the longest on record since the tradition started during President Bill Clinton’s administration, according to ABC News’ Alex Mallin.

The reason Sarah Sanders does not go to the “podium” much anymore is that the press covers her so rudely & inaccurately, in particular certain members of the press. I told her not to bother, the word gets out anyway! Most will never cover us fairly & hence, the term, Fake News!

Trump has announced the end of daily press briefings from the White House. Might as well make the briefing room a swimming pool again. It was built over by Nixon to accomodate the demands of television news. pic.twitter.com/iij1MUq9BL

Previous Lambda Legal Vows To Fight On: We’ll Send Trump’s Discriminatory Trans Ban To The Trash Heap Of History
Next GOP Sen. Joni Ernst Divorces Because Husband’s Hatred Of Her “Any Successes” Cost Her Being Trump’s VP