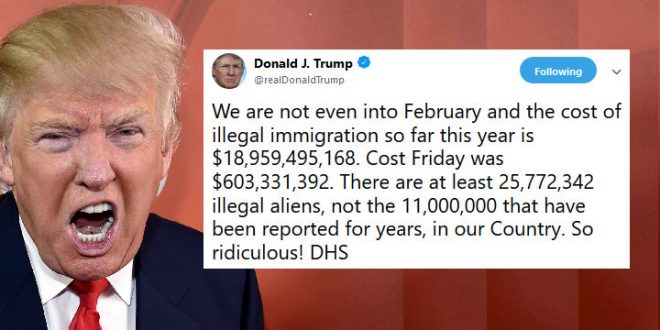 Fresh off a stinging defeat in a standoff over funding for a 2,000-mile wall along the U.S.-Mexico border, President Donald Trump on Sunday released shocking statistics to prove that his proposed barrier is critical to the nation’s economic security. Nobody has any idea where those numbers came from.

The numbers — so specific that they are rounded to the nearest single digit — appear to be credited to the Department of Homeland Security, but the department’s most recent publicly available estimates of the undocumented immigrant population in the United States is less than half the president’s purported minimum.

Trump’s claim even left anti-immigration groups flummoxed. It exceeded estimates from the Federation for American Immigration Reform, a Southern Poverty Law Center-designated hate group that seeks to reduce both legal and illegal immigration.

“We’re not sure how the president is sourcing his number and really wouldn’t want to speculate,” said David Ray, communications director for FAIR.

The president has also repeatedly contradicted his own estimates, claiming two weeks ago that the net cost of illegal immigration was $250 billion. And during the 2016 campaign, he asserted that cost was $113 billion a year.