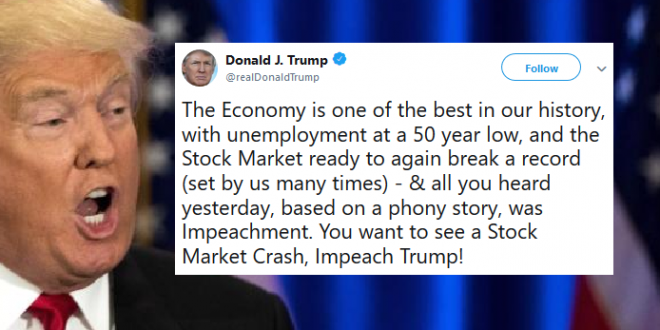 Trump: Impeach Me If You Want A Stock Market Crash

The Economy is one of the best in our history, with unemployment at a 50 year low, and the Stock Market ready to again break a record (set by us many times) – & all you heard yesterday, based on a phony story, was Impeachment. You want to see a Stock Market Crash, Impeach Trump!

Many people are saying that the Mainstream Media will have a very hard time restoring credibility because of the way they have treated me over the past 3 years (including the election lead-up), as highlighted by the disgraceful Buzzfeed story & the even more disgraceful coverage!

Mexico is doing NOTHING to stop the Caravan which is now fully formed and heading to the United States. We stopped the last two – many are still in Mexico but can’t get through our Wall, but it takes a lot of Border Agents if there is no Wall. Not easy!

Previous GOP Leaders Of Michigan And North Carolina Offer To Host Trump’s SOTU At Their State Capitol Buildings
Next Gillibrand Defends Call For Al Franken To Resign: My Silence Meant Defending Him, Which I Wouldn’t Do