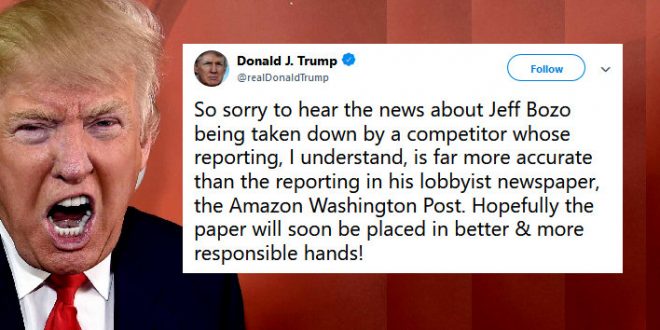 President Trump took to Twitter Sunday night to gloat about Amazon CEO Jeff Bezos’ divorce and the subsequent exposure of his personal life on the pages of the National Enquirer.

In the days following Bezos’ announcement on Twitter that he and his wife Mackenzie are divorcing, the National Enquirer published a series of exposes alleging that the pair had been separated for months, and that Bezos had been engaged in an affair with another woman.

It is not yet clear what the separation will mean for Bezos’ mind-boggling $137 billion fortune, and if it will have any impact on Amazon or The Washington Post.

So sorry to hear the news about Jeff Bozo being taken down by a competitor whose reporting, I understand, is far more accurate than the reporting in his lobbyist newspaper, the Amazon Washington Post. Hopefully the paper will soon be placed in better & more responsible hands!