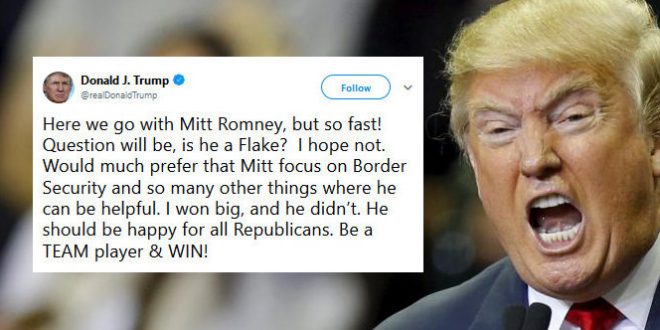 Trump Hits Back At Mitt Romney: I Won And He Didn’t

President Trump struck back at incoming Utah Sen.-elect Mitt Romney (R) on Wednesday after Romney challenged the president’s character in an op-ed, suggesting that Romney should be more supportive of his party.

The president’s tweet came hours after Romney targeted him directly in a Washington Post op-ed, accusing him of a glaring “shortfall” in terms of character and leadership abilities.

“With the nation so divided, resentful and angry, presidential leadership in qualities of character is indispensable. And it is in this province where the incumbent’s shortfall has been most glaring,” Romney wrote Tuesday.

Here we go with Mitt Romney, but so fast! Question will be, is he a Flake? I hope not. Would much prefer that Mitt focus on Border Security and so many other things where he can be helpful. I won big, and he didn’t. He should be happy for all Republicans. Be a TEAM player & WIN!