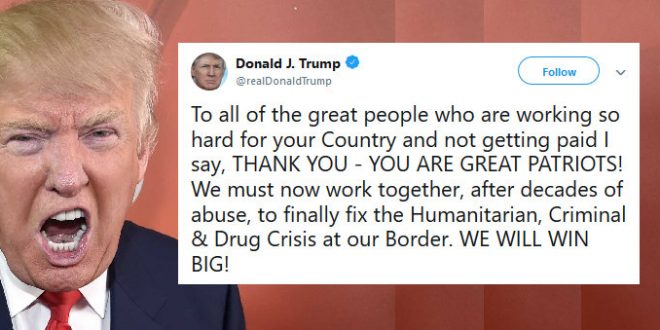 President Donald Trump has lauded the federal employees furloughed or working without pay due to the partial government shutdown, describing those not getting paid as “great patriots.”

Though the president has tried to shift the blame for the shutdown onto the opposition, polls have shown that most Americans blame Trump and the Republicans for the ongoing crisis—caused by a dispute over funding for the president’s proposed southern border wall.

The president has claimed — without evidence — that most Americans are behind his plan.

To all of the great people who are working so hard for your Country and not getting paid I say, THANK YOU – YOU ARE GREAT PATRIOTS! We must now work together, after decades of abuse, to finally fix the Humanitarian, Criminal & Drug Crisis at our Border. WE WILL WIN BIG!