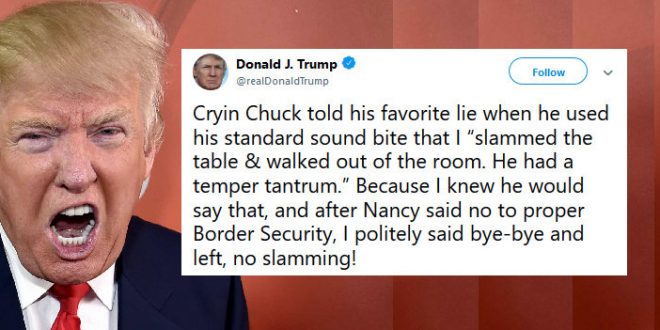 President Donald Trump is back on Twitter, this time disputing Senate Minority Leader Chuck Schumer‘s account of how their meeting together fell apart yesterday.

Schumer, House Speaker Nancy Pelosi and other Congressional Democrats journeyed to the White House yesterday for a new round of discussions about the government shutdown over Trump’s demand for a border wall.

After negotiations failed to go anywhere, Schumer told reporters Trump had a “temper tantrum because he couldn’t get his way,” slammed the table and walked out of the room.

Cryin Chuck told his favorite lie when he used his standard sound bite that I “slammed the table & walked out of the room. He had a temper tantrum.” Because I knew he would say that, and after Nancy said no to proper Border Security, I politely said bye-bye and left, no slamming!

There is GREAT unity with the Republicans in the House and Senate, despite the Fake News Media working in overdrive to make the story look otherwise. The Opposition Party & the Dems know we must have Strong Border Security, but don’t want to give “Trump” another one of many wins!