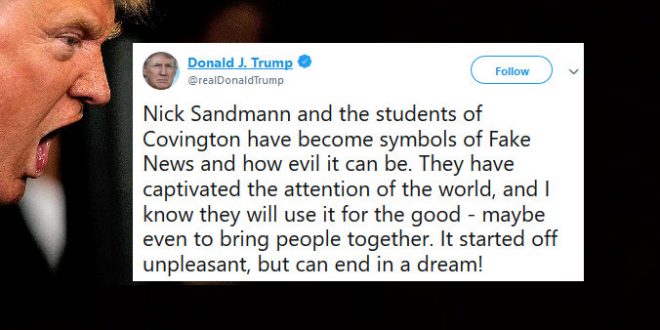 After a weekend marked by bitter recriminations over race and political bias, with the nation transfixed by viral videos depicting a confrontation between a crowd of Catholic schoolboys and a Native American elder, calls went out Monday — the federal holiday celebrating the life of Martin Luther King Jr. — for restraint.

But for President Trump, the dispute was not to be missed. It offered red meat to a president who has eagerly stoked the culture wars, while seizing every opportunity to discredit the media.

He has made the NFL one of his chief antagonists because of players who kneel during the national anthem to protest police violence, sending approval of the league plummeting among Republicans. He accused the media of misrepresenting his views after the deadly 2017 “Unite the Right” rally in Charlottesville, for which he blamed “both sides.”

Looking like Nick Sandman & Covington Catholic students were treated unfairly with early judgements proving out to be false – smeared by media. Not good, but making big comeback! “New footage shows that media was wrong about teen’s encounter with Native American” @TuckerCarlson

Nick Sandmann and the students of Covington have become symbols of Fake News and how evil it can be. They have captivated the attention of the world, and I know they will use it for the good – maybe even to bring people together. It started off unpleasant, but can end in a dream!

Previous Rudy Giuliani: I’m Afraid “He Lied For Trump” Will Be On My Gravestone, But If So, What Do I Care, I’ll Be Dead
Next AOC Gives “Zero Fucks” About Her Critics [VIDEO]