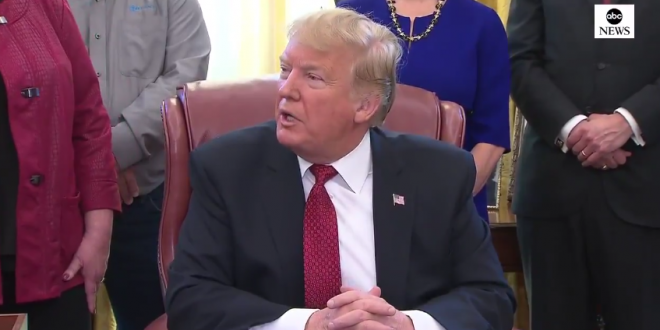 President Donald Trump on Thursday called the attack of “Empire” star Jussie Smollett “horrible,” condemning the assault committed by individuals whom the actor alleged referenced the president’s campaign slogan as they attacked him.

“It doesn’t get worse, as far as I’m concerned,” Trump said of the attack during an Oval Office exchange with the White House press pool on Thursday.

As they wrapped the rope around his neck — which a friend of the actor described as a noose — Smollett told detectives the attackers yelled, “This is MAGA country,” the Tribune reported. Trump did not comment on the alleged reference to his campaign slogan.

Chicago police this morning issued a shadowy surveillance photo of two “potential persons of interest.” They’ve also taken possession of the rope. Many pro-Trump sites have posted claims that the incident is a hoax.

In which the President of the United States pivots directly from talking about the "horrible" hate crime against Jussie Smollett from Empire to making excuses for why it happened to insinuating that a border wall would have prevented it. pic.twitter.com/OTOtk8r39b

Previous Rush Limbaugh: Once Homosexuality Is Proven To Be Genetic, All Gay People Will Become Pro-Life Overnight
Next Court Boots Carter Page’s Defamation Suit Against DNC