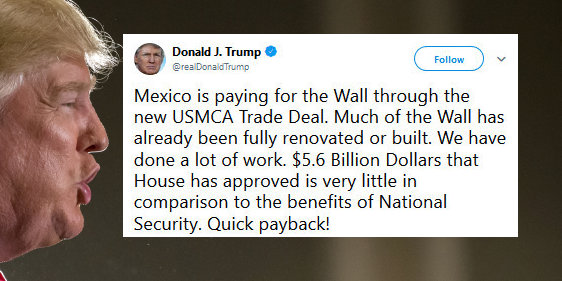 Trump Claims “Much Of The Wall Is Already Built”

And as always the cultists will lap up this garbage:

As President Trump prepares to meet with congressional leaders to negotiate the possible end of the government shutdown, he’s claiming once again that the wall’s construction is already underway with Mexico footing the bill.

So, let’s see. Mexico is supposedly paying for the wall with an updated NAFTA deal that will presumably stimulate U.S. economic activity enough to offset the wall’s cost through tax revenue.

Even if this federal revenue increase does happen as Trump claims, the actual end result here is American taxpayers will supply the money for the wall, not Mexico.

Mexico is paying for the Wall through the new USMCA Trade Deal. Much of the Wall has already been fully renovated or built. We have done a lot of work. $5.6 Billion Dollars that House has approved is very little in comparison to the benefits of National Security. Quick payback!