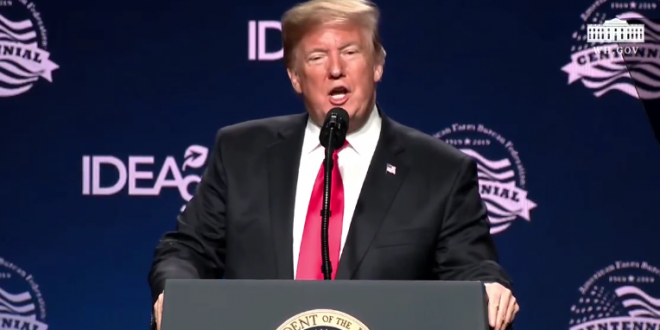 Trump Boasts About Checking Gas Prices From His Motorcade: You Think Hillary Would Have Done That?

President Trump on Monday credited his administration’s policies for the price of gas, and swiped at Hillary Clinton over the suggestion that she would not stop to admire low gas prices.

“I’m riding in this incredible car, and I’m driving and I’m looking at gas stations to see how much is the gas,” Trump said. “You think Hillary Clinton would’ve done that? I don’t think so.

“I’m in the Beast,” he continued, referencing the name for the vehicle the president rides in. “The world’s most expensive car. It’s like being in an army tank that goes 50 miles per hour. I’m in the Beast and I’m looking at the gas station. I say, ‘fellas, slow up, I can’t see.’ I say, ‘$1.75!’ That didn’t happen by accident, folks.”

Trump currently on an extended riff about how he checks the gas prices while he is being driven in his motorcade.
“You think Hillary Clinton would have done that? I don’t think so.”

President Trump gets a round of applause when he tells farmers at a New Orleans convention he’s going to make it “easier” for people to enter the US to work on farms: “I’m going to make that easier for them to come in … we’re keeping the wrong ones out” https://t.co/jdzBjIq0dq pic.twitter.com/p5je20Us9v

Trump concludes with some yelling. His speech to a group of farmers barely touched upon farm issues, but instead focused on making a case for his still-unpopular border wall. pic.twitter.com/LX9fHnlUz3