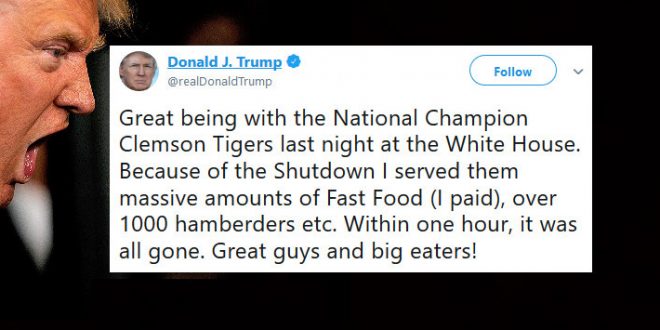 Trump Boasts: I Paid For Over 1000 “Hamberders”

Glorious Leader is even lying about how many hamberders:

The grand total? According to our count, Trump spent about $2,911.44 on feeding the team. A sixth of that is the fries alone, though, so take with a grain of salt. (The fries; also the estimate.) Half of the cost was incurred at McDonald’s alone. This total includes 319 sandwiches, 177 of which were hamburgers.

Was it indeed enough food? We didn’t see photos of the aftermath, so we don’t know exactly what might have been leftover. But we do know that the team alone is made up of 120 players, weighing over 27,500 pounds combined. So, the average Clemson player weighs about 230 pounds.

Hopefully, though, they left some food for their coaches and other attendees. There is one other asterisk worth noting. In other comments, Trump — in true Trump fashion — suddenly more than tripled the hamburger count.

Great being with the National Champion Clemson Tigers last night at the White House. Because of the Shutdown I served them massive amounts of Fast Food (I paid), over 1000 hamberders etc. Within one hour, it was all gone. Great guys and big eaters!

if trump serving McDonalds off of silver platters during a formal dinner at the White House isn’t a metaphor for his presidency idk what is pic.twitter.com/cBtPHfKKhC

America’s Nightmare: An over-the-top photoshop to make fun of how tacky Trump is and an actual photo of Trump are exactly the same. pic.twitter.com/0nEIztLnB2

There were jokes if Trump was elected he would turn the White House into a McDonalds. pic.twitter.com/YNJYnTDVC8

Previous Steve King Rages About His Freedom Of Speech After GOP House Leaders Boot Him From All Committees
Next Jerome Corsi: Mueller Has Subpoenaed My Stepson