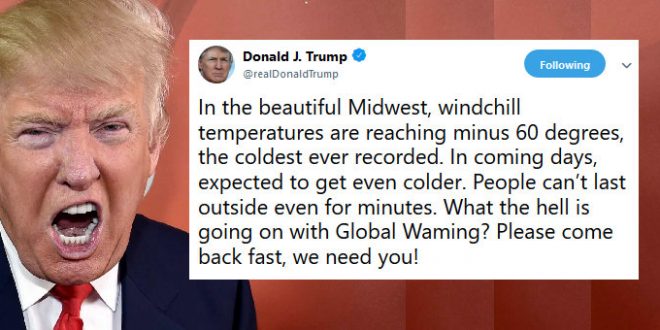 Trump Begs For Global “Waming” To Come Back Fast

Donald Trump has again appeared to fundamentally misunderstand climate change by suggesting extreme cold weather in the US is evidence global warming does not exist.

It follows a number of recent tweets by the president expressing gleeful disregard for the scientific consensus that holds human carbon emissions responsible for recent global temperature increases.

Earlier this month, Mr Trump tweeted the US would benefit from “a little of that good old fashioned Global Warming right now” amid forecasts of snow, and he also made the same joke in November following a bout of cold weather.

In the beautiful Midwest, windchill temperatures are reaching minus 60 degrees, the coldest ever recorded. In coming days, expected to get even colder. People can’t last outside even for minutes. What the hell is going on with Global Waming? Please come back fast, we need you!

Global Waming: the act of making an idiot of oneself on an international level.

Amazing to think America was once a scientific leader.