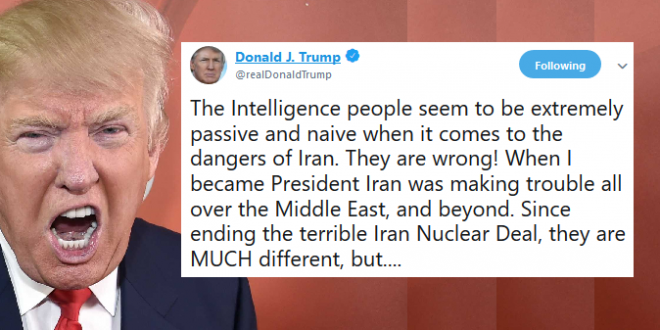 Trump Attacks Own Intel Officials: “Go Back To School!”

President Trump on Wednesday blasted top intelligence leaders for being “wrong” about their new assessment on Iran’s nuclear developments.

U.S. intelligence leaders one day earlier shared a new assessment with the Senate Intelligence Committee that the state is not currently developing nuclear weapons, findings that directly contradict the president’s claims.

The president, who claimed Iran has recently tested rockets, also mocked the intelligence leaders in his administration, suggesting they “should go back to school.”

President Trump says that the U.S. relationship with North Korea is the “best it has ever been” just one day after his own intelligence chiefs testified on Capitol Hill that the regime is still seeking to maintain its nuclear arms.

This comes after Director of National Intelligence Dan Coats told lawmakers on the Senate Intelligence Committee that the intelligence community had made “observations of some activity” in the region that were “inconsistent with full denuclearization” and that it was “unlikely” the regime would ever give up their nuclear weapons completely.

The Intelligence people seem to be extremely passive and naive when it comes to the dangers of Iran. They are wrong! When I became President Iran was making trouble all over the Middle East, and beyond. Since ending the terrible Iran Nuclear Deal, they are MUCH different, but….

….a source of potential danger and conflict. They are testing Rockets (last week) and more, and are coming very close to the edge. There economy is now crashing, which is the only thing holding them back. Be careful of Iran. Perhaps Intelligence should go back to school!

When I became President, ISIS was out of control in Syria & running rampant. Since then tremendous progress made, especially over last 5 weeks. Caliphate will soon be destroyed, unthinkable two years ago. Negotiating are proceeding well in Afghanistan after 18 years of fighting..

….Fighting continues but the people of Afghanistan want peace in this never ending war. We will soon see if talks will be successful? North Korea relationship is best it has ever been with U.S. No testing, getting remains, hostages returned. Decent chance of Denuclearization…

…Time will tell what will happen with North Korea, but at the end of the previous administration, relationship was horrendous and very bad things were about to happen. Now a whole different story. I look forward to seeing Kim Jong Un shortly. Progress being made-big difference!

Previous Bannon In New Documentary: I Hated Every Second In The White House But I Was “Doing The Lord’s Work”
Next Carlson: CNN Is Conspiring With Mueller Against Trump