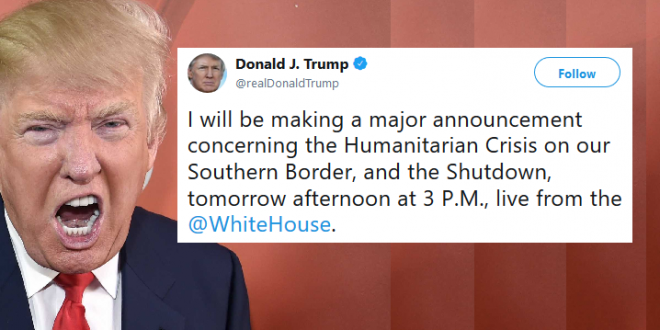 President Donald Trump said he will make a “major” announcement on Saturday about the border and ongoing government shutdown. The president did not provide any further details on what he would be discussing on what is set to be the 28th day of the partial government shutdown.

The shutdown is the result of Congress’s inability to pass a short-term funding bill for the government that Trump would be willing to sign. The president has insisted that such a bill contain more than $5 billion in funding to build a border wall. Democrats have refused to agree with that demand.

I will be making a major announcement concerning the Humanitarian Crisis on our Southern Border, and the Shutdown, tomorrow afternoon at 3 P.M., live from the @WhiteHouse.

Declaring a national emergency as a way to spend $5 billion without congressional authorization is also spectacularly unpopular: 51-36 against; 41-20 strongly against https://t.co/AxuaHcpIea

Appreciate the heads up to polish up my “trump declares national emergency” prewrite… https://t.co/2FVgv1rs6G