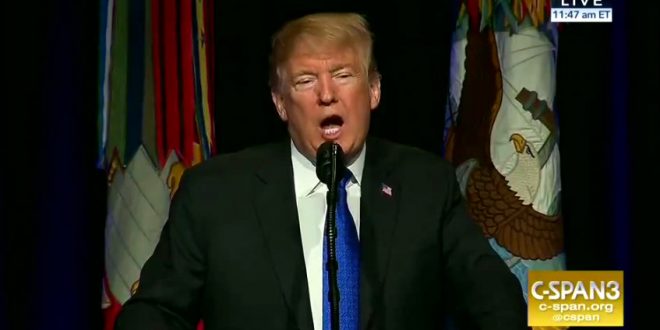 President Trump announced Thursday the results of a missile defense review that he said would update a decades-old system and protect the United States from emerging threats — adopting a Cold War stance while also promoting futuristic ambitions with his much-touted Space Force.

At the Pentagon, Mr. Trump said the strategy would help deter hostile states — including Iran, which he said “is a much different country” now than when he took office. “Our goal is simple: to ensure that we can detect and destroy any missile launched against the United States anywhere, any time, any place.”

Known as the Missile Defense Review, the strategy was originally planned for release last year, but was delayed. The changes mark the first update to the policy since a 2010 review by the Obama administration.

Speaking at the Pentagon, Trump briefly expresses “deepest condolences” to families of Americans killed yesterday in Syria, then quickly pivots to making an extended case for his border wall while bashing previous presidents.

Very bizarre & unbecoming of the commander in chief. pic.twitter.com/hzpKzKPtFo

Trump’s audience at the Pentagon sits in silence as the president talks about how he thinks a border wall is needed to “stop human hijacking,” while bashing Democrats and Nancy Pelosi. pic.twitter.com/AKXTfZfd9R

TRUMP: “There was a recent poll in Europe, the original poll when I first ran I was one of the most popular people in the world. And now they said, ‘he’s not popular in Europe.’ I shouldn’t be. Because I’m asking them to step up.” pic.twitter.com/eAY35cZXj2

Trump concludes weird Pentagon speech w/some rumor-mongering: “When I took office, you know it better than anybody, our military was very tired. It was very depleted. I won’t even tell you the things that some of our great generals were telling me… now it’s being rebuilt.” pic.twitter.com/j3EGR1ldg7

At the Pentagon officially to speak about the Missile Defense Review, Trump returns to his pitch for a border wall. He blames Democrats for the shutdown, claims the party has been taken over by the “radical left,” and warns of new caravans that include unknown people.

Today at Pentagon in front of top commanders Trump blamed what he called Democratic “fringe” and “radical” left. and Speaker Pelosi for not acting on his border plans. Entire room stayed silent and did not applaud partisan remarks. https://t.co/kquqbYG4Mo

Previous Nancy Pelosi: I Haven’t Heard From Trump Since I Sent Him A Letter Requesting SOTU Postponement [VIDEO]
Next Giuliani Tries To Backtrack On “Collusion” Bombshell