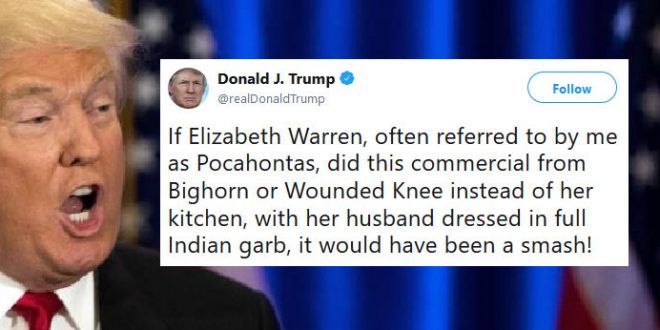 One hundred years after U.S. soldiers killed and maimed hundreds of Sioux men, women and children at the Wounded Knee massacre, Congress formally apologized in 1990 by expressing its “deep regret on behalf of the United States.”

On Sunday night, President Trump used that same massacre as a punch line in his latest broadside against Sen. Elizabeth Warren (D-Mass.), the Democratic presidential hopeful whom he regularly calls “Pocahontas” in jeering reference to her claims of American Indian heritage.

Critics found that message jarring, even from a president who has repeatedly ignored calls from politicians on both sides of the aisle, historians and Native American groups to stop calling Warren “Pocahontas.”

If Elizabeth Warren, often referred to by me as Pocahontas, did this commercial from Bighorn or Wounded Knee instead of her kitchen, with her husband dressed in full Indian garb, it would have been a smash! pic.twitter.com/D5KWr8EPan

….Border is eventually going to be militarized and defended or the United States, as we have known it, is going to cease to exist…And Americans will not go gentle into that good night. Patrick Buchanan. The great people of our Country demand proper Border Security NOW!

+300 of my people were massacred at Wounded Knee. Most were women and children. This isn’t funny, it’s cold, callous, and just plain racist. pic.twitter.com/9xgnSUTp4k

Everyday I think I can’t be surprised anymore—but what in the actual hell. Wounded Knee was the massacre of more 300 Lakota men, women, and children. And the current shutdown is hitting Native communities extra hard. This comment isn’t “racially charged”. It is racist, full stop. pic.twitter.com/XAuynMRktR

didn’t put “incoherent joke about the Wounded Knee massacre” on my 2019 news cycle bingo card, but here we are

So if I’m keeping track, tonight the president quoted one of the most notorious white supremacist sites in the country and mocked the massacre of hundreds of Hunkpapa and Miniconjou Lakota men, women, and children at Wounded Knee? I have that right?