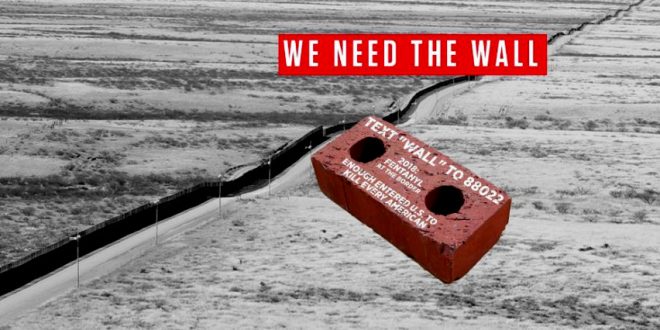 An email the campaign plans to send to supporters pledges to send a “BEAUTIFUL BRICK” to Mr. Schumer and Mrs. Pelosi. “Together, we can build a BIG BEAUTIFUL WALL around their offices to protect us from their radical left-wing agenda,” the email draft reads.

“Since Chuck and Nancy keep stonewalling the president, we’ll send the wall to them, brick by brick, until they agree to secure the border,” campaign manager Brad Parscale said. The faux bricks will bear the Trump campaign logo and a “fact about the need for border security,” the campaign said Friday.

Here’s a prototype of the red foam bricks the Trump campaign plans to start mailing to Pelosi and Schumer, as political advisers urge Trump to keep up the border wall fight. Each brick has a border security fact and a Trump campaign logo. w/@michaelcbender https://t.co/LbL3xRV6n6 pic.twitter.com/m101pPSaC4

NOW THIS FROM TRUMP: For $20 You Can Send A “Brick” To Chuck And Nancy pic.twitter.com/0nhB4N5YYD

Since Chuck and Nancy keep stonewalling the President, why don’t we send the wall to them, brick by brick, until they agree to secure the border!

Trumps re-election campaign just sent out an email to donors asking them for contributions in exchange for sending red faux bricks with facts about the southern border to Schumer and Pelosi. In the email, they omitted telling folks where those bricks are being made. Anyone know? pic.twitter.com/xwPNw1OMnl

Chuck and Nancy need a reminder that there is a MASSIVE crisis on our southern border. Send a BRICK to their offices to tell them WE NEED THE WALL! https://t.co/azKOV6MlLN#MAGA #BuildTheWall #Trump #TeamTrump

Previous Shutdown: Federal Courts Are Running Out Of Money
Next Pentagon: Bases Under Threat From Climate Change