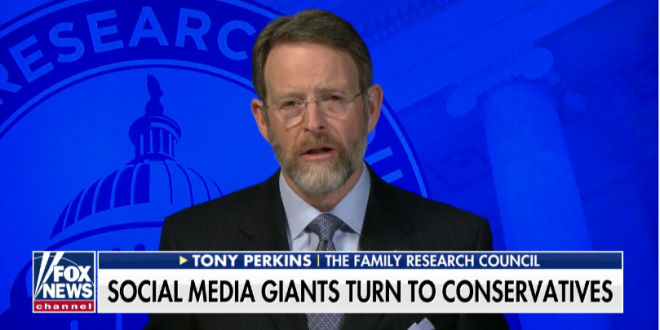 Tony Perkins On Working With Facebook: I Told Them They Have A Problem With Censoring Right Wingers

Hate group leader Tony Perkins appeared on Fox & Friends this morning where he attempted to downplay a Wall Street Journal report that Facebook has asked him for advice on their hate speech rules.

“I was in Egypt earlier this week. Read the story. I was a bit surprised that I was described as consulting with Facebook. I do think social media world has a different definition of terms. If, you know, you never have a conversation with somebody or meet them, they’re your friends. If they read your post of 280 characters, they’re a follower. Now if you have a phone conversation, you’re a consultant. I’ve had one conversation with Facebook. Obviously they’re in trouble as many conservatives understand that they are censoring conservative speech and the free flow of conservative ideas online.

“Well, I said they do have a problem. There is a great concern among conservatives and we just saw the recent example of this a couple weeks ago during Christmas where my friend Franklin Graham had a 2-year-old post removed for a 24-hour period. They said it was an accident. And one of the things I communicated was that, you know, these accidents appear more and more frequently. And so either they are failing to use the technology that they’re promoting or there is an intent here to squelch conservative ideas and the free flow of information.”

Previous Common Saw Easily Cuts Through Wall Prototype
Next Trump: “I Never Said” Mexico Will Pay For The Wall