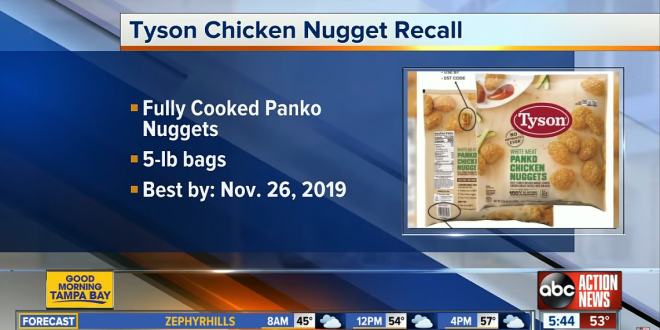 Just months after recalling frozen breaded chicken tenderloins over fears they were contaminated with plastic last June, Tyson has issued an alert over its chicken nuggets.

A statement issued by the USDA’s Food Safety and Inspection Service says that 36,420 pounds of the food company’s chicken nuggets may have been contaminated with rubber, resulting in a recall.

The recall of Tyson White Meat Panko Chicken Nuggets — with packages listing a “best if used by” date of Nov. 26, 2019 — was prompted after customers complained of “extraneous material,” i.e. the rubber. No adverse health reactions have been confirmed, though the health risk is listed as “high.”

Tyson is recalling White Meat Panko Chicken Nuggets because they could be contaminated with bits of rubber. pic.twitter.com/n2tT0u8cTG

Previous Biden Holds Big Lead In Poll On Dem 2020 Candidates
Next Bannon In New Documentary: I Hated Every Second In The White House But I Was “Doing The Lord’s Work”