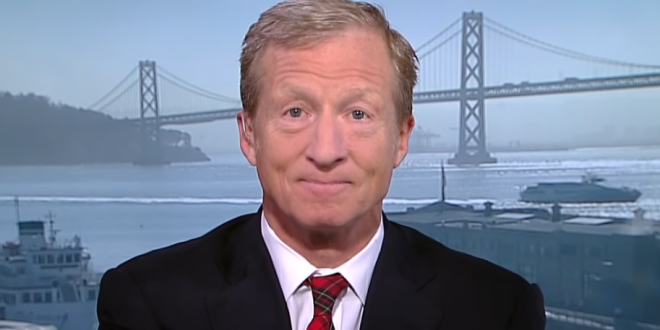 Tom Steyer To Democratic Hopefuls: Don’t Even Bother Running For President If You’re Against Impeachment

Tom Steyer is launching an effort to make every Democrat campaigning to run against President Donald Trump first come out in support of impeachment. Volunteers from Steyer’s organization, Need to Impeach, already showed up at several of Elizabeth Warren’s events earlier this month during her first swing through Iowa and tried to pin her down on impeachment.

Steyer and his staff plan to spread out over the country and on TV, canvassing nationwide and showing up at presidential-campaign events, while intensifying online outreach to his list of 7 million supporters, the largest independent political operation in the country.

They’ll kick off the new phase with an “impeachment summit” scheduled for next week in Washington, D.C. “If you’re against impeachment, don’t bother running. Save your time. Drive an Uber,” Steyer said while driving to New Hampshire last week for his latest town hall.