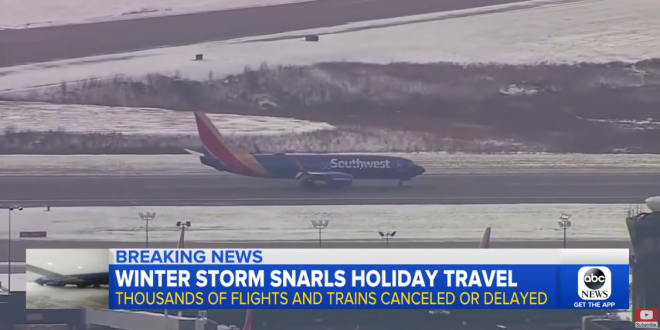 Thousands Of Flights Cancelled Due To Massive Storm

The Great Plains were digging out, the Great Lakes were being walloped and the Northeast was bracing for impact on Saturday as a huge snowstorm raced across the Northern states.

The storm, which complicated travel and busted plans for the three-day weekend across much of the country, caused problems from Kansas, where the governor declared an emergency, to New England, where forecasters predicted up to two feet of snow and warned of avalanches.

The fallout was bleak: Flights canceled by the thousands, extensive power failures and stern warnings to stay off the roads in cities like Chicago, where the downtown was conspicuously quiet on Saturday morning as plows tried to keep up with the growing piles of snow.

Winter Storm Harper barreled into the Midwest and Northeast Saturday, forcing the cancellation of thousands of flights, killing a Kansas DOT worker and causing two jetliners to slide off slick runways.

A United Airlines jetliner slid off the runway Saturday morning after landing at O’Hare, the Chicago Tribune reports. No one was injured when United Airlines flight 656 from Phoenix to Chicago rolled off the concrete surface into a grassy area.

On Friday, Southwest Airlines 1643 slid off the runway at Eppley Airfield after landing about 2:05 p.m. local time, according to the Omaha World-Herald. Freezing drizzle was falling at the time.

A fast-moving winter storm unloaded a messy mix of heavy snow, strong winds and frigid temperatures across parts of the Midwest and Northeast over the weekend while canceling thousands of air flights. https://t.co/hkiFaxd5w8