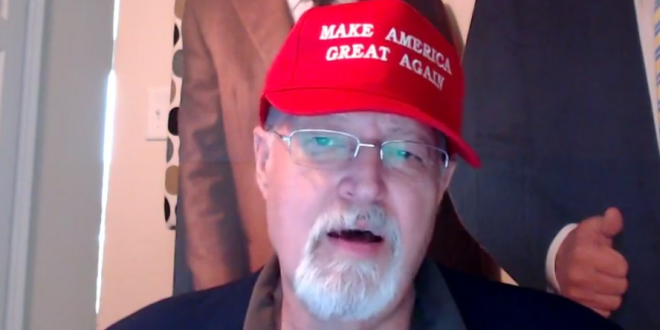 A Drag Queen Storytime protester allegedly trespassed in the Freed-Montrose Library this weekend after previously being banned from the premises. James “Doc” Greene Sr., who was issued a trespassing warning last month by the Houston Public Library (HPL) stating he could no longer visit its Montrose location, was detained, disarmed, and escorted out by police on Saturday, Jan. 26, for entering the building and refusing to leave.

Greene, a conservative radio show host for Raging Elephants Radio, recorded the incident and posted a video of his exchange with HPL staff and police on YouTube. At the start of the video, Greene is inside the library surrounded by around seven police officers. He repeatedly asks a library worker for her name and the reason why he is being asked to leave the library. “We have a bunch of homosexuals that are molesting children,” Greene says in the garage. “They are doing it with your help.”

Hit the link for more about the incident. There are multiple photos of Greene wearing his Trump hat on his Facebook page. A frequent commenter on that page is “March4Trump” organizer Tex Christopher, who earlier this month lost his lawsuit to ban Drag Queen Story Hour in Houston. It looks like he has filed an appeal with the Fifth Circuit Court.

Previous Bernie Sanders To Intro 77% Estate Tax On Billionaires
Next Pastor At Church Where Trump Claims Membership Says He Never Walked Through The Doors: “Not One Time”